The Watch that Ends the Tightening Cycle?

A question that we are hearing more and more frequently in recent days is: What exactly has changed in the past few months to justify such a dramatic adjustment in the North American interest rate outlook? After all, the spirited recovery in stocks over the past eight weeks has lifted the S&P 500 above its 200-day moving average and has essentially reversed the December slide. As well, the government shutdown is done, U.S./China trade talks have taken on a better tone, and employment gains just keep chugging along. Yet, in barely three months’ time, the outlook on central bank policy has taken a 90 degree turn, and held it. Since the point at which most U.S. interest rates peaked in early November, market expectations for Fed rate hikes have receded by roughly 50 bps, a move that has been almost mirrored across the Treasury curve. 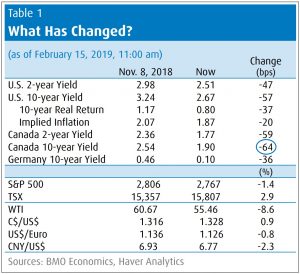 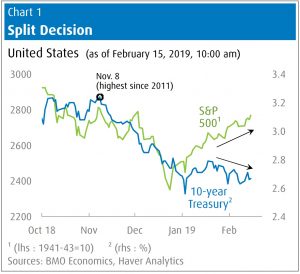 Note from Table 1 how little most other major financial variables have shifted on net since the collapse in rate expectations since November; and, it’s a broadly similar tale for key economic metrics such as jobless rates and inflation. With stocks basically reversing their late-2018 sag in short order, the complete reset in bond yields stands in stark contrast (Chart 1). So, again, what precisely has changed to trigger such a sea-change in the central bank outlook?

First, let’s dispense with the theory that the Fed succumbed to political pressure. For one, the most intense criticism from the President was unleashed just prior to the December rate hike. Next, note that both that meeting’s decision, as well as the dramatically more dovish tone at the January FOMC, saw unanimous votes. It’s pretty tough to believe that the entire Fed board was swayed by hectoring from on high. Finally, note that Canadian markets also had a similarly dramatic rethink on the BoC outlook late last year, without any political posturing getting in the way (Chart 2). The difference is that the Canadian overnight rate at 1.75% is 50-75 bps below the Fed’s target range; while the Fed may have paused at the cusp of being at neutral, the BoC is well shy of the mildest estimate of neutral. 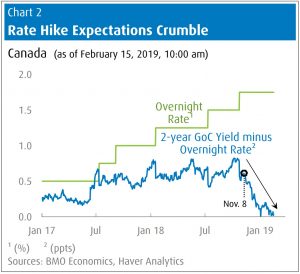 Instead, something much more fundamental must have changed to prompt such a profound pivot in the central bank outlook. Fed Chair Powell identified four broad factors for the change in January: tighter financial conditions, policy uncertainty, lower inflation expectations, and slower global growth. As we have previously asserted, all of the first three could readily be reversed or have already done so—for example, the snap-back in stocks, the partial recovery in oil, the retreat in yields and corporate spreads have eased financial conditions and stabilized the inflation outlook. The policy uncertainty is hardly a new development, and may soon see some resolution on a few key files (U.S./China trade and Brexit).

The strongest and most compelling answer for what has changed is a weaker outlook for the global economy. It likely is not a coincidence that both Germany and Japan reported negative quarterly GDP readings the very week after yields peaked last November. Real concerns about global growth re-emerged with force at that time, and have not let go. The IMF has since clipped its forecast, and almost certainly has not yet gone far enough to meet the dimmer reality for 2019 (we are looking at a 3.3% rise for global GDP versus their revised 3.5%). This week saw the OECD LEI drop for a 12th consecutive month, taking it to a near decade low (Chart 3). Perhaps the most pronounced change has been seen in Europe, which is now being widely flagged as “the most likely region to first sink into recession”. Industrial production fell more than 4% y/y in December and Q4 GDP eked out a meagre 0.8% annualized rise, taking the annual gain down to just 1.2% y/y versus 2.7% just one year ago. Between budget wrangling in Italy, the Yellow Vest protests in France, Brexit, more political uncertainty in Spain, and Germany’s auto sector difficulties, all major EU economies are facing challenges. 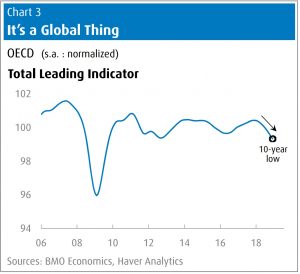 The cooldown is certainly not confined to Europe. Market volatility and policy uncertainty rattled U.S. consumer and business confidence, highlighted by the December dive in retail sales. After reaching a record high in August on the NFIB, and a 17-year high on the Conference Board’s consumer survey, sentiment for both sectors has cascaded back to levels last seen in late 2016 (Chart 4). While there are a whirlwind of factors at work here, intensifying trade conflicts may be the most corrosive underlying factor. Note the deepening slide in export sentiment in both Germany and the U.S., which began to really pick up steam after trade hostilities were cranked up last spring (Chart 5). 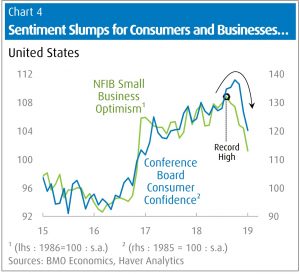 If we can thus conclude that the primary and lasting reason for the Fed (and BoC) shift is a marked-down global outlook, the crucial next question is: will slower global growth be enough to not just pause the rate hike cycle, but to end it? The answer most likely depends on what unfolds for some of the many lingering policy uncertainties—especially on the trade front. Provided there are no big shocks, we suspect that the underlying bias to lift rates somewhat higher will re-emerge, and that there is as much upside risk to our call of one further rate hike as there is downside.

Bottom Line: Part of the abrupt reset in all interest rates can be justified by the combination of lower oil prices, a weaker global backdrop and trade uncertainty. Part, but not all. While both the Fed and the BoC have retracted their talons, we believe that this is a pause, and not an end, to the tightening cycle. We still lean to one more rate hike later this year by both, and hold on to the possibility of more in 2020 if some of biggest risk overhangs are resolved— U.S./China trade, Brexit, debt ceiling, etcetera, etcetera…

Please click here to access the article in its original format, including BMO’s Disclosure and Conflict Statement.

Facebook
Twitter
Linkedin
Email
Print
Previous articleDespite a correction, emerging markets are the correct place to be
Next articleElections: Headaches in Spain & Nigeria

Last November, the Federal Reserve announced that it will review the “strategies, tools, and communication practices it uses to pursue ...
Read more
BMO

Ever been rudely interrupted from an idyllic dream, only to face the hard reality of another brutal winter morning, skidding...
Read more