Stockholm (Ekonamik) – In its latest CoVID-19 Situation Report, published on March 11th, 2020, the World Health Organisation (WHO) identified 118,322 cases of Coronavirus 2019, of which 37,367 took place outside of China. So far, the international organisation has counted 4292 fatalities, of which 1130 outside of China.

Two cases have been identified in the Nordic region: one in Sweden and another in Finland. Both of them are understood to have been caught in China. In total, Europe has registered just above 800* cases of the disease, the vast majority of which (655) from Italy, where 17 people have passed away due to the virus. The only other European country where fatalities have been registered in France, where two patients have died so far. In the Nordics, Sweden is the most affected, with 7 confirmed cases, followed by Finland (2) and Norway and Denmark, each with one patient detected. The spread of the virus has now reached its exponential stage.

According to the European Centre for Disease Prevention and Control (ECDC), “as of 12 March 2020, 22 105, cases have been reported in the EU/EEA and the UK”, of which Italy represent over 50%. Of these, 943 had resulted in deaths. Scandinavia had registered 1,526 cases, but only one death, in Sweden.

While it is still too early to forecast the ultimate effect of the Coronavirus on the global economy, economists have nevertheless tried to provide estimates based on the relative progression of the virus vis-à-vis previous outbreaks. Quoting research published in the Journal of Environment and Public Health, according to Douglas McWilliams, of the London-based Centre for Economic and Business Research (CEBR), “it is now estimated that SARS reduced world GDP in 2003 by between $30 and $100 billion. This is equivalent to 0.08% and 0.25% of world GDP.”

Given that China now represents almost four times as large a share of GDP (16.9%) than it did in 2003 (4.3%), the effect of a similar SARS outbreak would presumably be much more significant than it was seventeen years ago. Adding this increased relevance of China to the relatively wider spread of CoVID-19 and of the measures being taken to prevent it, we can expect the damage on GDP to be similarly proportionate.

The IMF has taken notice. “We are still learning about how this complex virus spreads and the uncertainties are too great to permit reliable forecasting,” Kristalina Georgieva, Managing Director of the IMF commented on February 22nd. “Many scenarios can play out, depending on how quickly the virus is contained and how fast the Chinese and other affected economies return to normal. In our current baseline scenario, announced policies are implemented and China’s economy would return to normal in the second quarter. As a result, the impact on the world economy would be relatively minor and short-lived. In this scenario, 2020 growth for China would be 5.6 percent. This is 0.4 percentage points lower than the January WEO Update. Global growth would be about 0.1 percentage points lower. But we are also looking at more dire scenarios where the spread of the virus continues for longer and more globally, and the growth consequences are more protracted.”

Others are more sanguine. According to estimates from Oxford Economics, the Coronavirus may cost as much as US$1 trillion worth of global GDP in 2020, equivalent to 1.3% of the planet’s GDP. On the academic front, a working paper published by Warwick McKibbin and Roshen Fernando at the Brookings Institution uses a Dynamic Stochastic General Equilibrium (DSGE) approach to consider seven different scenarios of how the Corona Virus might impact GDP. According to his simulations, the pandemic might cost the global economy anywhere between US$283 billion to US$9.17 trillion.

The effects of a pandemic on the global economy can be categorised into one of two groups. On the one hand, there’s the loss of life associated with the virus, which would have direct effects on the size of the labour force and on the goods and services it can produce. For this situation to materialise, the virus would need to continue to spread unchecked in the same way that the Black Plague in the middle ages or the Spanish Flu of 1918 did. Fortunately, at this stage, the death toll still does not seem to warrant concerns of this kind. However, the WHO warns that it has not been able to estimate the new virus’ mortality rate accurately.

Where the real cost to GDP lays is in the effect of containment and preventative measures. Stopping the spread of the virus has required quarantining of a scale not seen in centuries, if ever. The quarantining of entire cities in China was originally the peak of concerns causing delays in Apple’s production, forcing thousands of Starbucks coffee shops and Toyota factories to close down and leading to the cancellation of hundreds of thousands of flights. However, the problem has become much more acute in the last two weeks.

The situation seems to have escalated out of control in Italy, where the WHO identified 10,149 confirmed cases and 631 deaths, as of March 11th. On March 9th, the country’s government extended travel bans imposed on the north of Italy to the whole nation. Subsequently, all public gatherings have been banned, while schools and commercial enterprises have been temporarily shut down. Panic has led people to raid supermarkets and stock food in case conditions deteriorate, leading to empty supermarkets, a sight not seen in decades.

Outside of Europe, Israel has imposed a 2 week quarantine period on all arrivals to the country, effectively forbidding short-term tourism. In the USA, Trump banned all passenger flights from Europe, in hopes of containing the problem, although the exceptions he has introduced might undermine his efforts.

Echoes of these macroeconomic concerns can be felt in financial markets. However, as with the spread of the virus itself, global financial markets appear to be playing catch up with China. Markets were not particularly prescient about the crisis. In part, this was down to Chinese authorities’ delayed response to the crisis.

It was in the aftermath of the measures taken by authorities during the Spring Festival (extended) weeklong holiday at the end of January that markets reacted. Despite the outbreak starting in December 2019, the Shanghai Composite Index (SSE) followed an upwards path up until the eve of the national holiday on January 23. During the holiday Chinese authorities quarantined Wuhan, Huanggang, Chibi, Enshi, Ezhou, Huangshi, Suizhou, Qianjjiang, Xianning, Xiantao, Yichang, Zhijiang, Xiangyang, Jingmen, Xiaogan, and Dangyang, locking down approximately 50 million people. Although by January 23, the SSE had already fallen by 4.6% from its January 14 peak of CNY3,213, by the time the SSE reopened on February 4, it had fallen by another 8% to CNY2,734. It now stands at CNY2.924 on account of the containment and financial stimulus responses by the Chinese government.

OECD markets have been slower to respond, only taking stock of the situation at the end of February. Following its latest peak of US$ 3,390 on Tuesday, February 19, the S&P500 index fell by almost 8% in the following six days, due to Coronavirus concerns. After a short recovery at the start of March, when conditions in China seemed contained and the spread to Europe had not yet fully exploded, the S&P500 restarted on a downwards path, closing at US$2,741 on March 11th. In Stockholm, the OMX Stockholm 30 Index has also taken a hit, falling from SEK1,901 on February 20th to SEK1,431 as of March 11th.

Less central to immediate global concerns, but nevertheless relevant for the discussion about the challenges facing climate change has been the environmental impact of the Coronavirus.

According to Carbon Brief, a UK-based website covering the latest developments in climate science, climate policy and energy policy “the reductions in coal and crude oil use indicate a reduction in CO2 emissions of 25% or more, compared with the same two-week period following the Chinese new year holiday in 2019.”. 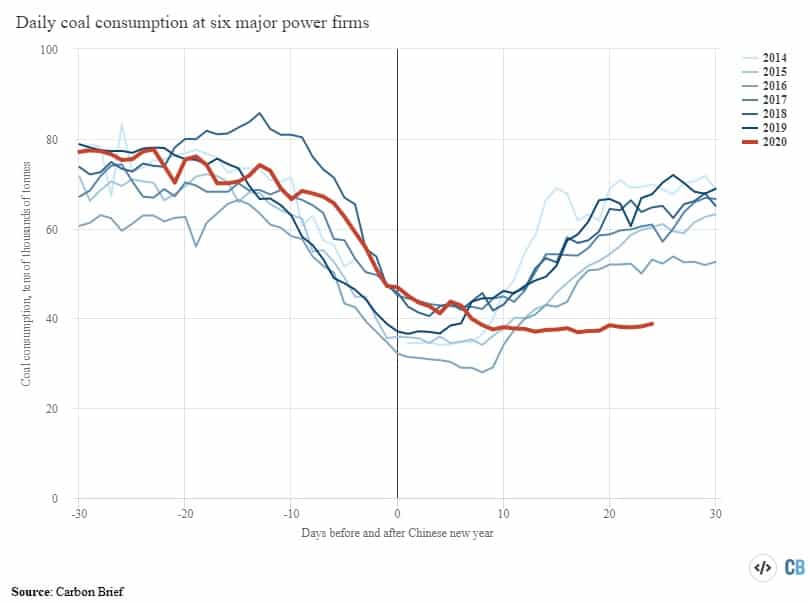 This decrease amounts to approximately 100MtCO2, more than twice as much as Sweden’s total CO2 emissions from fossil fuels in 2016 or 12.5% of Germany’s annual emissions.

Stockholm (Ekonamik) - Along with a handful of smaller European countries such as Austria and the Netherlands, Denmark is one nation that appears to...
Read more
By Filipe Wallin Albuquerque
March 12, 2020
Facebook
Twitter
Linkedin
Email
Print