Stockholm (Ekonamik) – As the summer bush fires continue to ravage Australia, claiming the life of billions of animals and 23 people, the public debate has started moving towards assessing the causes and consequences of this natural disaster.

The scale of the disaster cannot be understated. While unusually intense fires have been raging in New South Wales for months, the rest of the country enjoyed a relatively mild spring fire season by the standards of the years 2003-2018. However, that changed in December, according to fire intensity information collected by the EU Copernicus Atmosphere Monitoring Service (CAMS). Since then, fire activity across the country was many times higher than the average for the previous 16 years. As of 3 January, almost six million hectares of land had burned, equivalent to an area larger than Croatia. 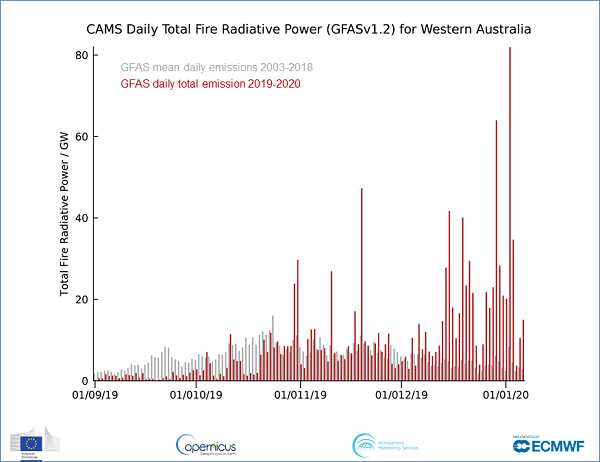 According to the EU CAMS, dry and hot conditions enabled fires to spread quickly during this Summer’s fire season. These conditions were facilitated by unusually low levels of rainfall across most of the continent throughout 2019. Although it is still not fully understood, the EU’s CAMS also notes that rare and sudden warming of the stratosphere occurred over Antarctica in September 2019 also caused hot and dry winds across Australia during Autumn 2019, promoting favourable conditions for widespread wildfires.

While it is still too early to establish a clear cut connection between the fires and climate change, there is a clear pattern of rising temperatures and lower rainfall in Australia over the last 110 years, which is consistent with that hypothesis. The ongoing Australian tragedy is yet another instance of fire seasons becoming, on average, increasingly destructive. Such events are one of the consequences of climate change that the scientific community has been warning about for a long time.

Australian political attitudes appear problematic. While the Morrison Government is not to blame for the last 110 years of global greenhouse gas (GHG) emissions, it is noteworthy for its reactionary attitudes to this phenomenon. While acknowledging it was not withdrawing from international agreements, the Climate Change Performance Index noted that “the new government is an increasingly regressive force” in climate-related negotiations.

While estimates vary somewhat, one would expect the resulting loss of life and property destruction to have a net negative effect. At the start of the second week of 2020, the Insurance Council of Australia (ICA) reported that 6,000 insurance claims worth AUD431 million had been made. At the lower end of the impact spectrum, JP Morgan’s Chief Economist, Sally Auld, argues that despite their tragic nature, the fires will have a limited effect on GDP. According to her assessment, the regional distribution of the fires is concentrated in areas with a modest contribution to GDP, so the fallout will be small. The Chief Economist also astutely highlights that the way in which the insurance industry works will contribute both negatively (loss in outputs and input) and positively (the cost of rebuilding) to GDP. Still from Wall Street, analysts at Goldman Sachs forecast that the fires will cut 30 basis points from Australian GDP in the last quarter of 2019/first quarter of 2020. Estimates by AMP Capital‘s Chief Economist, Shane Oliver, put the cost at somewhere between 0.25% and 1% of GDP growth this year. If the fires cause consumers to further lower spending, the Reserve Bank of Australia, the country’s central bank, might just cut its rate at its February meeting.

Asides from the immediate GDP effect of the fires, the scale of GHG emissions produced by the destruction of have been significant, particularly in New South Wales. Estimates suggest the fires have so far released 400 megatonnes of carbon dioxide into the atmosphere.

Stockholm (Ekonamik) - Along with a handful of smaller European countries such as Austria and the Netherlands, Denmark is one nation that appears to...
Read more
By Filipe Wallin Albuquerque
January 15, 2020
Facebook
Twitter
Linkedin
Email
Print