CEBR – US economy adds 145,000 jobs in December as the trade war takes a toll on US manufacturers

London (CEBR, Alastair Neame) – According to data released by the Bureau of Labor Statistics (BLS) today, there were 145,000 additional nonfarm payrolls added to the US economy in December. This is weaker than the 164,000 additional payrolls expected and below the average monthly gain of 176,000 in 2019. Meanwhile, the unemployment rate was 3.5% in December, unchanged from November and the annual rate of average hourly earnings growth was 2.9%, down from 3.1% in the previous month.

As the US enters an election year there will likely be a shift in focus towards the economic policy of the Trump administration and its impact on the labour market. Importantly some trade policy decisions have challenged the economic orthodoxy – wielding punitive tariffs to try and reduce or eliminate the trade deficit, especially with China. The wider policy aim, touted during the 2016 presidential campaign, was to boost the US manufacturing sector and bring jobs lost to globalisation back to the US.

By the end of last year tariffs of 25% had been applied to $250 billion of Chinese imports, with a 10% tariff on a further $125 billion. As the trade war escalated, retaliatory tariffs were imposed by the Chinese on many billions of US exports too. The latest data shows that the US goods deficit in the 11-months to November 2019 was $15 billion lower than in the previous year, suggesting that the policy has, in one respect, had the desired effect. However, a closer look shows that the $32 billion reduction in imports of goods was partially offset by a $15 billion reduction in exports over the same period – a sign that a slowdown in both the US and global economy is probably driving imports lower, which doesn’t bode well for jobs growth.

A study by the National Bureau of Economic Research showed that many of the US firms that have faced higher import tariffs are large employers that also export heavily. Notably, these firms represented roughly 65% of US manufacturing employment. The products most exposed to higher tariffs faced a reduction in export growth of around 2 percentage points compared to those that weren’t affected by the higher tariff regime. According to the BLS manufacturing employment fell by 12,000 in December. This left employment in the industry up by just 46,000 in 2019 compared to an increase of 264,000 in 2018, suggesting the escalation in the trade war towards has contributed to slower growth in manufacturing jobs over the course of 2019.

The US and China are expected to sign an initial deal to ease trade tensions next week which, combined with the Fed’s decision to steadily loosen of monetary policy during the second half of 2019, means prospects for the new year look more promising. Cebr forecast that growth in the US economy will have slowed to 1.2% in 2019 but will pick up again in 2020 to 1.4%. 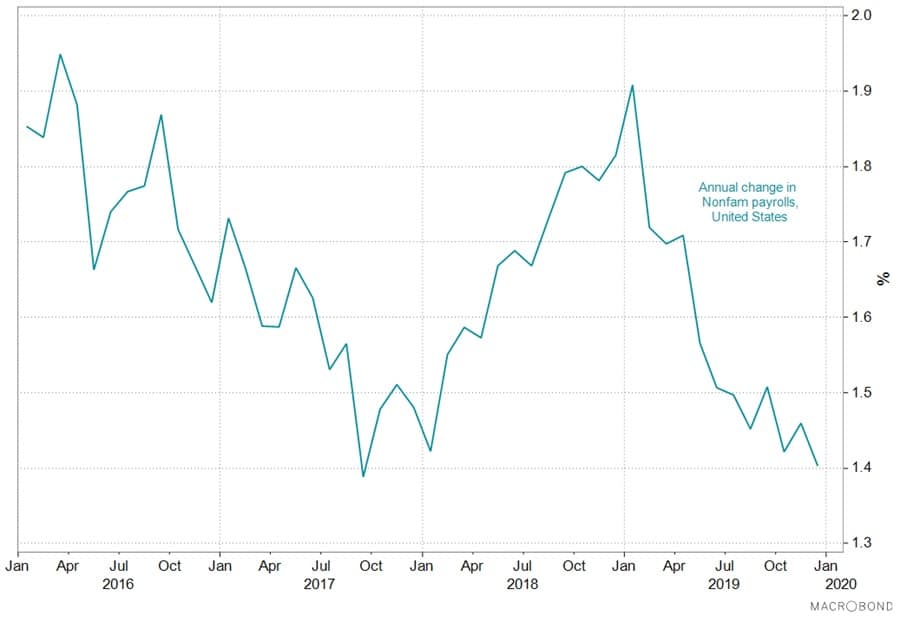 Image by TeroVesalainen from Pixabay

Stockholm (Ekonamik) - As the COVID-19 pandemic continues to spread around the globe and as the world seeks to lift restrictions ahead of the...
Read more
Megatrends

Stockholm (Ekonamik) - Given the demographic and financial challenges facing pension systems in developed countries, NordSIP was keen to reach out to Pensionsmyndigheten –...
Read more
News

Introducing a User Guide to COVID-19